The origins of the cultural phenomenon

Hookah, also known as a qalyan, is a water pipe instrument widely used in the Middle East. It works by vaporizing a special type of tobacco through heated coals or embers. The vapor (or smoke) will then pass through a water basin before being inhaled by the user.

The exact origin of this device is unclear. Many believed it originated in India. There are two theories regarding its invention or origin. The first theory is that the water pipe was invented by a Persian physician, Abu’l-Fath Gilani of Akbar, from the city of Fatehpur Sikri in the 15th century, following the Jesuits’ introduction of tobacco to medieval India. The use of the instrument spread from the Indian subcontinent to Persia (modern Iran) where it was modified to its present shape, before it arrived in the Near East countries.

The second theory is that it originated during Persia’s Safavid dynasty in the 16th century, where it then spread to the Indian subcontinent all the way to the east. The word hookah came from the Hindustani word “huqqa” of Arabic origin, which means “casket, bottle, water pipe”.

Now, the hookah is widely used throughout the world, especially among the younger generation. The use of the hookah is deeply rooted in a cultural tradition that has been around for generations among Indians, Persians, Turkish, Egyptians, and other Middle Eastern families. Smoking is considered as a social activity among family and friends, and sessions center around conversations and connectedness among the participants. It’s also a way to show hospitality to guests and business associates 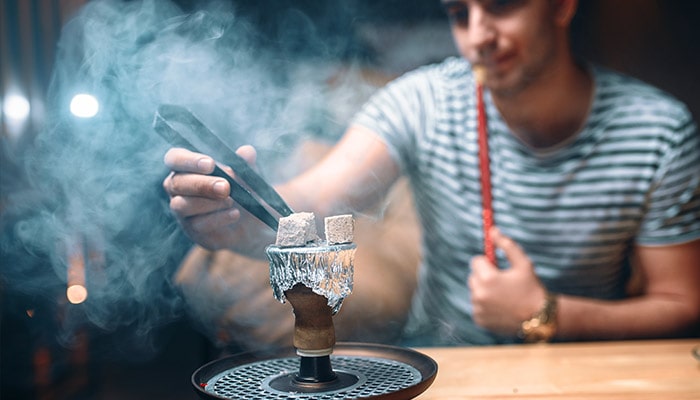 Diving Deeper Into the Hookah’s History – 16th to 18th Century

It started with the glass

The hookah came to India at the height of Indian glass manufacturing in the 16th century through the British East India Company (now called the East India Company). Smoking tobacco was quite popular amongst noblemen in high society. The hookah was invented from the attempt of purifying the tobacco smoke through the water inside a glass called “shisha”.

Since then, the use of the vaporizing instrument has been regarded as a way to show off one’s social status among noblemen. When a stronger variety of tobacco plant called Ajami arrived in Persia, the use of the hookah quickly became part of Persian culture. Craftsmen took pride in manufacturing unique and redefined pipes through woodworking. This is when the instrument became more accessible to the masses, and the industry of hookah servants emerged.

Even the Shah (emperor, king, lord, etc.) at the time had his own hookah servants. In the 18th century, when the influence of India started to reach Turkey, the hookah became part of Turkish culture. Blacksmiths started to cast smoke instruments with more intricate brass designs and adorned the pipes with religious and royal markings.

The shisha became a prominent part of Turkish high society and was regarded as a status symbol. Royals and diplomats smoked shishas in their meetings and gatherings. Offering the smoke became part of the hospitality and tradition of the Turkish people. It’s been said that declining it can be taken as a serious insult.

In the 19th century, the use of hookah quickly spread throughout the Middle East. Egyptians used traditional types of tobacco before they reformulated it into Mu’Assel, a mixture of tobacco with honey or molasses. Mu’Assel literally translates to “with honey”, but the term is widely used to refer to flavored tobacco. From there, different ingredients were used to add flavors to the tobacco, including lemon, mint, grape, watermelon, etc.

This is when shisha sessions exploded into popularity, as special cafes were built to accommodate the growing demand for it. Hookah smoking became so common that it promoted a community among its patrons. It united people across different classes, races, and genders as it became a popular way to relax and socialize.

In the 20th century, the tradition of hookah continued to grow across India, Turkey, Persia, the Middle East, and neighboring countries like Armenia, Israel, and Pakistan. In the next few years, people started to migrate to virtually every continent around the world. They brought their customs and traditions with them, including the use of shisha.

Today, the hookah (shisha) tobacco industry is quite a big market in the United States. Tobacco manufacturers have also found ways to improve the quality and variety of their products through modern technology. New flavors are being introduced to the market, giving consumers more options beyond the traditional flavors to meet the growing demands of current-day tastes. Now, shisha is quite popular among college students, as more and more bars, cafes, and lounges are offering it across the country.

Despite these innovations, the shisha traditions have remained largely the same as it was hundreds of years ago. It is still a tool that brings people together 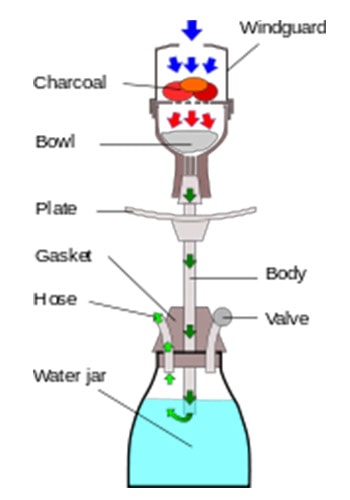 What Type of Tobacco Is Often Used in a Hookah?

There are many different types of tobacco used for the hookah, and it is important to note that hookah tobacco is different from those used in cigarettes. Turkish-blend shisha tobacco is arguably the most popular choice.

Today, tobaccos for hookah are often mixed with different fruit flavors and aromas. There are virtually unlimited options of flavors and aromas to choose from, such as apple, coffee, coconut, pistachio, lemon, mint, vanilla, and more exotic combinations. There are even mint chocolate chip flavors and cream sodas, and desserts or sweet treats such as blueberry muffin, along with drinks like the margarita, apple martini, cherry cola, or cognac flavors.

The hookah tobaccos you find in the market right now are only around 30% tobacco. The rest are blends of molasses or honey and flavorings. To keep them moist, they are blended with vegetable glycerol. This is to minimize the consumption of nicotine. Also, there are zero tar options with only .05% nicotine in them.

To keep the hookah tobacco fresh and moist, it must be stored in sealed and airtight containers and kept in a cool and dry place, away from direct sunlight. If stored correctly, it can last for up to six months.

How the United States Loves Hookah

In the USA, hookah or shisha is gaining much popularity amongst young adults. Students are banding together to bond over a session and so do the working class. The rising demand is further seen as many hookah lounges and bars are establishing themselves across the country. Hookah bars and lounges are one of the best places to meet up with other hookah lovers and smoke together.

East African immigrants residing in the Twin Cities are one of the most known hookah users for the frequency of their sessions. They are typically college students but sometimes adults. In a study done in a college found in the Twin Cities, almost half of the entire student population was found to have tried hookah once or twice. Meanwhile, in Minnesota, high school and college students are reported to have the highest rates of using or trying out hookah.

Another study in the United States showed that hookah use is increasing. The same study showed that most cigarette users have actually switched or have tried out hookah as well, especially among subgroups.

In terms of the entire population, there are about 480,000 high school students and 150,000 middle school students that smoke shisha via a waterpipe. Most of them try it out because they enjoy the flavors available. 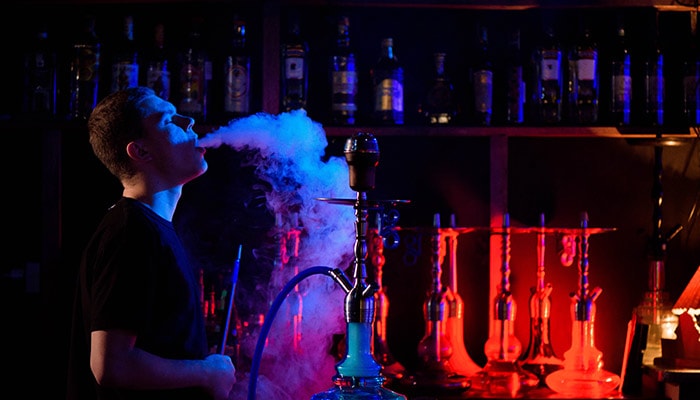 What Are The Regulations in Place in the USA Regarding Hookah?

There are certain rules in place to regulate hookah. In Minnesota, they have established the Minnesota Clean Indoor Air Act, or the MCIAA for short, where all types of smoking are disallowed in indoor areas. Additionally, the law prohibits the sampling or testing of tobacco in shops.

Many hookah lounges were created to take advantage of this loophole. Loungers are actually an exemption to this rule.

The FDA included the use of hookah in their tobacco products law in 2016. The law states that the FDA is allowed to regulate anything that goes with tobacco handling, shipping, sampling, sale, and many others, including hookah. The 2016 rule also includes lighters, tongs, and even burners.

So, if a company wants to continue to create and sell hookah or tobacco, it must comply with the manufacturing rules and regulations for them to safely operate. This includes warning statements on nicotine components printed on the packaging of the tobacco product.

The FDA is also strict when it comes to minors, tobacco, and hookah. According to the law, minors are not allowed to be sold tobacco, whether or not they are in hookah form. Sale and distribution to minors are legally prohibited and must not be done. If tobacco products are being distributed to minors, it is required by law to report them for the violation of the FD&C Act or the tobacco regulations of the FDA

Since many Americans are starting to try hookah out, it is essential to be aware of the health benefits and risks it poses for a responsible session. There needs to be a discussion on hookah smoking as compared to cigarette smoking – especially since both use tobacco as the main component.

Calming the System and Socializing

It is known that hookah and cigarettes are both calming and anxiety-soothing methods that many people use to relieve stress after a long day. Many people bond over smoking both of these and have a fun time doing so.

Hookah, however, is an easier way to socialize with friends. This is because you can pass your hookah pipe around a circle while chatting. Meanwhile, smokers connect over a lighter but not an actual cigarette. It’s easier to smoke with friends with a shisha.

Both types of smoking have adverse effects such as secondhand smoke exposure, cancer, respiratory disease, and even heart disease as well. For hookah, many friends and classmates like taking a hit and passing around the same pipe and the same mouthpiece, putting them at risk of acquiring infectious diseases. These include tuberculosis and hepatitis.

Plus, hookah smokers would inhale more smoke compared to cigarette smokers. An average session entails inhaling 90,000 mL of smoke. Meanwhile, a normal cigarette would produce approximately 500-600 mL of inhaled smoke per session. This means it would take 100-200 cigarettes for a cigarette smoker to catch up to a hookah smoker’s one session.

← How to Smoke Shisha Is CBD psychoactive? →