All of our hash products are 100% kief hand shifted and pressed into sticky CBD hash bricks.

No CBD Distillate or other flavors or additives, just pure hash. Just like it has been made for thousands of years.

Enhance your smoking session with the most concentrated all-natural CBD product.

Express your freedom to choose a natural remedy that is in line with you, not big pharma.

What is CBD Hash?

CBD Hash is simply the trichomes of cannabis hemp stripped from the plant into a powder concentrate some refer to this as the pollen or resin of the plant.

Pollen CBD hash also contains more than just CBD it is full Spectrum containing a higher concentration of all cannabinoids giving you a good amount of entourage effect. CBD hemp hash is a great concentrate to add to CBD hemp or marijuana flower simply break some off and sprinkle it inside a joint or over a nug and enjoy.

CBD hemp Hash comes in a few different forms, but all hash Khronix carries are solvent-less extractions made in our lab. We only use water or really cold temperatures to break off the trichomes of the CBD hemp flower and then sift them through a very fine nylon cloth to get pure hemp kief.

This removes as much of the plant matter as possible. Then it is pressed together with a lot of force-generating heat that sticks the kief together into hash bricks. 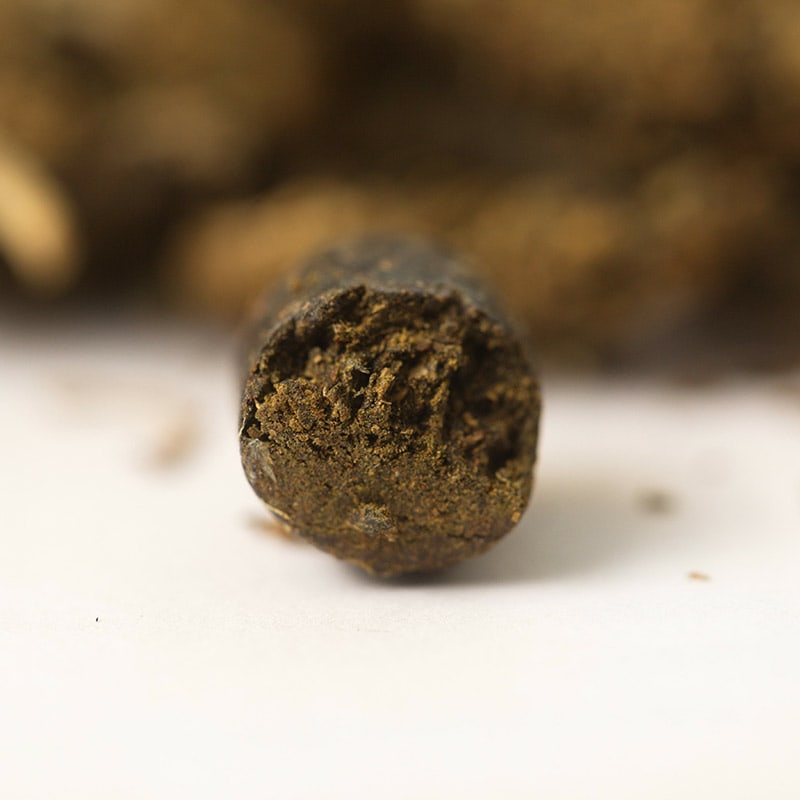 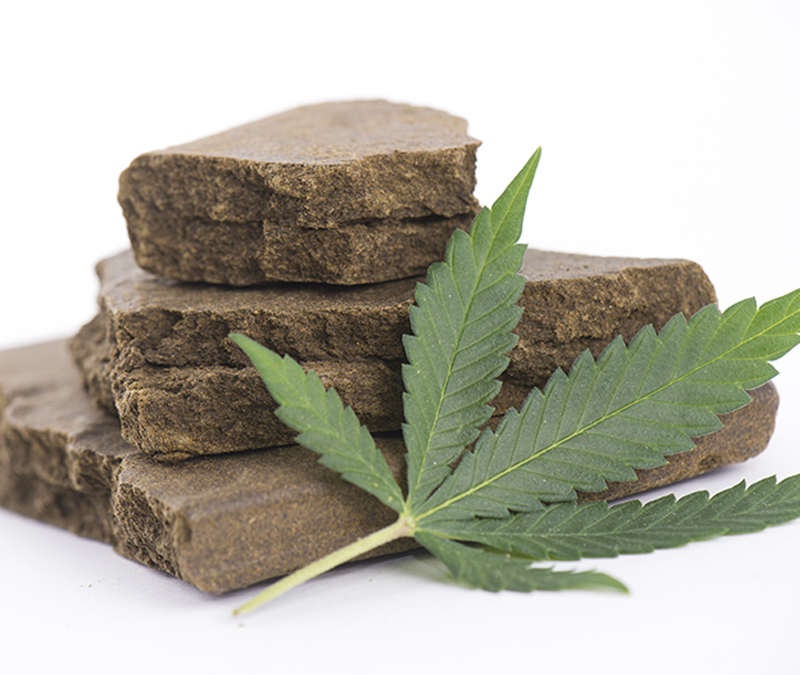 Where Does CBD Hash Come from?

Khronix produces all our CBD hemp hash right here in the USA from organically grown hemp cannabis but the history of hash is wide-reaching. Hash is popular in many different countries, but probably more popular in Europe and has been consumed for many centuries but the origins are a little unclear but some may say it originated in Northern India. You can read the History of Hash here

How is CBD Hash Consumed?

CBD Hash is not typically consumed on its own, it is mostly mixed with marijuana or tobacco, but there are many ways to smoke CBD hash, and will go over some of them here

The easiest way is to simply take the CBD Hash grams break them apart with your fingers into smaller granules and mix it in with ground marijuana or hemp flower. Then roll a joint as you would regularly do. Or if you are smoking tobacco you can do the same with your shredded tobacco. The Hash will change the flavor of the joint to a more musky deeper flavor mostly the joint will smoke the same but perhaps a little slower.

You can smoke CBD hash out of a regular pipe but the hole is a little bit to big at the bottom of the bowl so you risk sucking bigger parts of the hash through. There is a special pipe for smoking hash with a smaller hole so you do not have pieces of hash in your mouth or lungs. You can also just top a bowl with hash that way you will smoke all of it without sucking it through.

A dab rig is great for smoking hash but hashish is a full-plant concentrate there will be a lot of organic residues that did not burn away. When you are finished you should clean your glass banger after. Some people also use knife hits this is where you heat 2 knives over a burner and press one knife down on a small piece of hash and then quickly take the other hot knife from the burner and press the CBD hash together between them put your mouth close but not to close and inhale.

If you feel like reminiscing about being 15 again knife hits are a great way to smoke hash and bringing back the nostalgia of hiding pot from your mom.

Just heat up 2 dull knives over an open flame burner get them good and hot. Proceed to rip off a small piece of hash place it on the counter take one knife from the flame use fork and slide the hash onto the top of the knife. Then take the other knife from the flame and press them together. This will burn the hash and you can inhale the smoke.

Some people use a straw so they don’t have to get their mouth close to the red hot knife or a plastic water bottle cut in half to funnel the smoke to your mouth. After finishing let the knives cool and scrub them and put them back before your mom gets home. 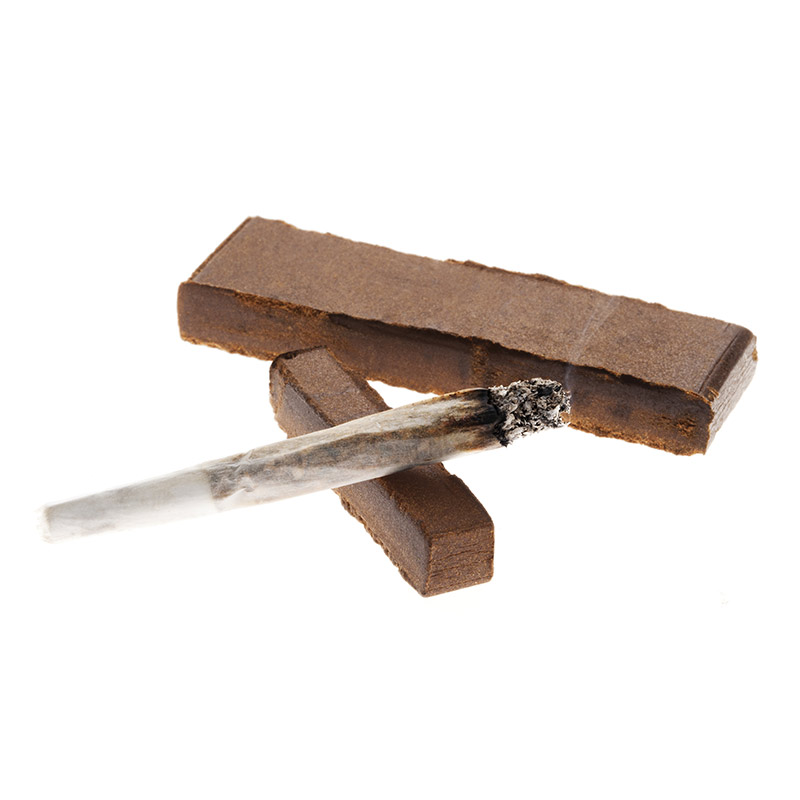 Is CBD Hash Legal in the USA?

Yes, CBD Hash is legal if it is under <.3 % THC, this is hard for most hemp concentrates to be this low in THC, but Khronix has developed a way to create high CBD and CBG hash that meets the 2018 Farm bill in the USA. So whether you have 1 gram or 20 grams it is legal all through the USA. You do not need a medical card to purchase,

Can you cook with CBD HaSH?

Yes, hemp hash can be used for making CBD edibles. You can make CBD Hash brownies, CBD cookies, CBD Tea, or pretty much whatever you like. Make edibles is not a new thing, just go to youtube and follow some instructional videos on cooking with hash. Cooking with CBD hash is the same as marijuana hash but you do not have to worry too much about overdoing it and curling up on the floor for 3 hours. It will not make you stoned.

But important to note since hash is not heated enough during the creation you can not just eat it directly, it needs to be decarboxylated or heated to convert CBDa to CBD.

CBD hash has a bit of a flatter profile than CBD flower, Hash denser and muskier and can look black or dark green. Hemp hash from different strains will a slightly different smells and tastes but not like the differences in flower. Hash is a consolidation of the trichomes and only some plant matter where the terpenes are. CBD flower will have a more pungent sharp nose to it, This is one reason Hash has been so popular when it was illegal it was easy to conceal in regards to smell and size.

Is CBD Hash the Same as CBD Flower?

CBD hash is not the same as CBD buds, They are great to consume together, the hash will have higher concentrations of CBD and all other cannabinoids since it is a concentrate of the female cannabis plant.

Just like CBD nugs, different strains will have different profiles, but to create a compliant CBD product in the United States only a few strains can be used to produce hash with under 0.3% THC. Those high CBD low THC strains are Super Lemon Haze, Berry Blossom, Cherry wine, T1 & T2, and Sour Diesel. It is impossible right now to make THC free CBD hash.

These hemp strains have very low concentrations of THC and we are able to create CBD Hash that is THC compliant. Also, look to try our CBD CBG Hash blends. We can become more creative with blending some CBG Hash since CBG has very low THC.

CBD oil is hemp biomass gone through an extraction process, CBD oil may have a very high amount of CBD more than hash. You take the oil by way of a tincture which is CBD oil extract mixed with some kind of carrier fluid like MCT oil. CBD hash when smoked is a quick way to get CBD and other cannabinoids into your body but you may get a larger or more exact amount of CBD into your body by taking a CBD oil or tincture. That is why the medical community is more into tinctures and pills than CBD Hash. 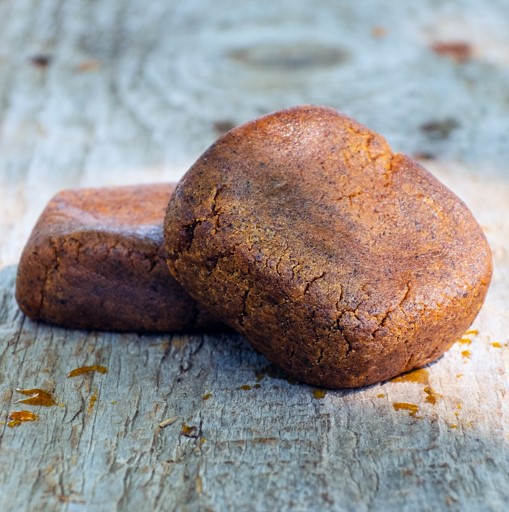 Can You Make CBD Hash

Yes, you can make CBD hash from fresh or dried hemp. Here is an article on how to make Bubble Hash and another on Dry Ice hash. Depending on what strain you use will change the color and smell of the hash but most hash will be darker green or black, because of the heat or pressure that was used in pressing it.

how much cbd does hash have

It is a concentrate of CBD so it is going to have more than the flower it is taken from. There are various methods of making it but one key determination will be what size screen is used and how much plant matter is in the has but you can see that it will be 2-4 times as strong as the starting material.

Does CBD hash make you high

With CBD being higher the THC level is usually higher but still not enough to get you actually high, so no it does not get you high or stoned.

Keif and Hash are basically the same thing but you can probably say hash is better because even though it is Keif, it is hard to tell how much plant matter is in kief. CBD hash is pressed Keif and if there is too much plant matter in the kief it will not stick together into nicely formed hash. Also, it is a little easier to tell if it is new or freshly made in hash form. To an experienced eye, you can tell if it is really pure kief, but if you are not familiar with kief and hash best to default to buying CBD hash.

Read our article: What is CBD Kief?

All products are legal under the the 2018 Farm bill certifiying that they contian less that 0.3% THC Sources of Information https://en.wikipedia.org/wiki/Hashish